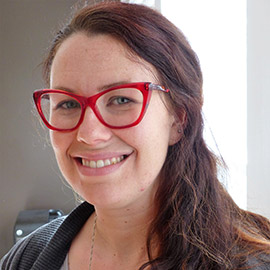 Kristyn Anderson completed her Master’s degree in Child and Youth Studies at Mount Saint Vincent University in 2007, followed by her Master’s degree in Social Work at Dalhousie University in 2009. Since then, she has worked exclusively in publicly funded child and adolescent mental health and addictions programs, in both inpatient and community-based settings. She is a Registered Social Worker (RSW) in the Province of Nova Scotia licensed to practice in private settings.

In 2015, Kristyn was accepted as a Pre-Clinical Fellow with the American Association of Marriage and Family Therapists (AAMFT) and continues to work towards full accreditation as a marriage and family therapist with this organization. Kristyn enjoys working from a strength-based perspective, working collaboratively with families and couples to deepen connections, and build resiliency to buffer the effects of future stress